Cash-carrying investors and real estate investment trusts (REITs) are gobbling up distressed assets and converting them into rental properties faster than many small-time buyers can scrape together enough cash to buy even one property, but there’s still a way for the average investor to make a profit. One way is to invest in REITs like Annaly Mortgage, which is poised to make big earnings from planned buys. Another way to make good is to search out single investment opportunities that haven’t yet been bundled, because these smaller assets are often overlooked by big spenders. For more on this continue reading the following article from TheStreet.

Just as the word on the Street says that the Federal Reserve is telling member banks to pick up the pace on lending, we have a chance to buy two companies that are poised to profit from their generosity.

To make matters more exciting, one of these companies, Annaly Mortgage (NLY) just announced after the markets closed on Tuesday that its board has authorized the real estate investment trust to buy back as much as $1.5 billion worth of its outstanding common stock over a 12-month period.

That’s nearly 10% of the outstanding shares based on NLY’s Oct. 16 market cap of $15.32 billion. The buybacks will be made periodically on the open market or in privately negotiated transactions, the company said. After rising during Tuesday’s session almost 1% it gained another 1.5% in afterhours trading.

Founded in 1997, Annaly is the largest mortgage REIT listed on the New York Stock Exchange. Its stock total return performance over the last 15 years and the amount of dividends paid are brilliantly illustrated by charts on the company’s well-organized Web site.

NLY has corrected over the past month as a result of concerns about a rise in mortgage refinancing and bond prepayments. This was blamed on falling interest rates fueled by Fed policy and the Fed’s massive mortgage-backed securities purchases.

A telephone interview and report by Bloomberg with NLY’s co-CEO Wellington Denahan-Norris helped put things in perspective and shed light on the correction of mortgage REITS like NLY.

The report stated that, "Mortgage REITs are losing investors who have been attracted by average annual dividend yields currently at about 13%, or almost seven times that of Standard & Poor’s 500 companies. The firms use cash raised through share sales and borrowed money to invest in government-backed mortgage securities, housing debt at risk from defaults, or both."

The report also reminded readers that while dividends are bound to fall somewhat, they’re still well above those of competing investments such as high-yield corporate bonds. Many investors are shocked to see these yields on so-called "junk bonds" being pushed lower by global central banks who are intending to stimulate their economies. Junk yields fell to a record low 6.95% last month, according to a Bank of America Merrill Lynch index.

"It’s not just at the mortgage REITs where the returns in this market are being put under assault," New York-based Annaly’s Denahan-Norris said Tuesday in the Bloomberg telephone interview. "It’s the general global landscape where you have an incredible mispricing of risk that’s being delivered at the hands of academics at the central banks of the world."

To support the stock’s price and compensate for the impending yield reduction in the current $2.00-per-share annual dividend, the stock buyback program will act as a sort of "invisible dividend" that has already helped the share’s price to rally.

NLY is the biggest and the best of the mortgage REITS, and with their expertise in this area they’ll make the adjustments and decisions needed to support the stock’s price. Keep in mind that the company’s Chairman of the Board and co-CEO, Michael Farrell owns an astonishing 2,706,392 shares of NLY as of Oct. 1. As of Tuesday’s closing price of $15.72 that equals an investment of $42,544,482.

It’s helpful to remember that when you own shares of NLY you’re also indirectly invested in FIDAC, a wholly owned subsidiary of Annaly Capital Management. Formed in 1994 by Michael Farrell and acquired by Annaly in 2004, FIDAC is a SEC-registered investment adviser.

FIDAC specializes in managing residential and commercial mortgage loans and securities, CDO liquidations and provides other financial services. The team that manages Annaly plays the same roles at FIDAC. FIDAC’s team of investment professionals has built a successful long-term track record through some of the most challenging fixed-income markets in memory.

As a service provider to the public and private markets, FIDAC manages various investment vehicles including serving as external manager for Chimera Investment (CIM) and also for Crexus Investment (CXS).

A similar kind of REIT that has fared much better during the past month is Two Harbors Investment (TWO) which focuses on investing in, financing and managing residential mortgage-backed securities.

Besides all those profitable activities, TWO is building an inventory of single-family rental properties and houses. With low-interest loans offered by the government they can target houses that are selling at significant discounts to their replacement value while creating an abundant stream of rental income for shareholders.

TWO recently invested around $150 million in these kinds of homes (1,370 of them) in growing states like Arizona, California, Florida, Georgia, Nevada and North Carolina. Another exciting development is its recent announcement plans to spin off its residential real estate portfolio. The new company will be called Silver Bay Realty trust and TWO will own a large percentage of the company.

Silver Bay will be totally dedicated to purchasing, managing and renting more residential real estate. In time TWO’s stake in Silver Bay will be distributed to current shareholders. In the meantime the income generated by this income-streaming operation will flow through to TWO shareholders and help support the current generous dividend yield of 12.3% yield (based on a share price of $11.70).

Two of a Kind 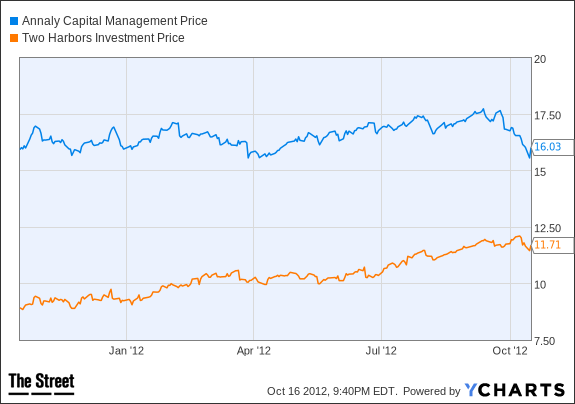 Annaly Capital Management shares are "on sale" right now and, even with the concerns regarding their government-backed mortgages, they have plenty of ways to keep paying a generous dividend and move their share price higher. If you can buy below $16-a-share it should offer a profitable long-term return.

Now is also an auspicious time to begin accumulating shares of Two Harbors. TWO has trailing-12-month operating margin and profit margin (around 83% for each category) that speaks to their outstanding management and growth potential.

With their mind-boggling earnings growth rate and plans to enrich shareholders through expanding their rental housing ownership program, there should be plenty of money to be made over time. It would not surprise me to see a total return in both NLY and TWO of 20% or more over the next year.