Are We In Worse Shape Today Than Prior To The Last Financial Crisis?

The Effect on Gold and Silver The question that should be asked but never is. “Are we in worse shape than we were just prior to the last …

The Effect on Gold and Silver

The question that should be asked but never is. “Are we in worse shape than we were just prior to the last great financial crisis or are we better off?”

I believe that very few, if any, of the problems that caused the last financial crisis have been mended.  In fact, if you scrutinize a few points closer you will come to the same conclusion as I did with relative ease.  The truth is most of the problems have only gotten worse.

In fact, since 2008 the total amount of debt in the world has ballooned by more than 40 percent. Since 2007, the too big to fail banks have also gotten nearly 40 percent larger, and the titanic derivatives bubble has spiraled so far out of control that the only thing left to do is watch the spectacular crash landing that is inevitably coming.  Unfortunately, most people do not know the information that I am about to share with you in this article.  Most people just assume that the politicians and the central banks have fixed the issues that caused the last great financial crisis.  We assume this not as a fault of being human but because we believe that they have our best interests in mind and at heart.  But the truth is that we are in far worse shape than we were back then.  When this financial bubble finally bursts, and it will, the desolation that we will witness is likely to be absolutely ruinous.

Based on this predication there are at least three very clear symptoms that make this common sense argument valid.  Housing and mortgages continuing to slump, the overgrowth of the too big to fail institutions and the inability by the US to keep them in check, and lastly the growth of debt.

We just learned that the number of new mortgage applications in the world’s largest economy, the United States, had fallen to the lowest level that we have seen in nearly 20 years.

It is really no surprise. Mortgage purchase applications have been falling right alongside real median household income (noxious green line in the chart below). 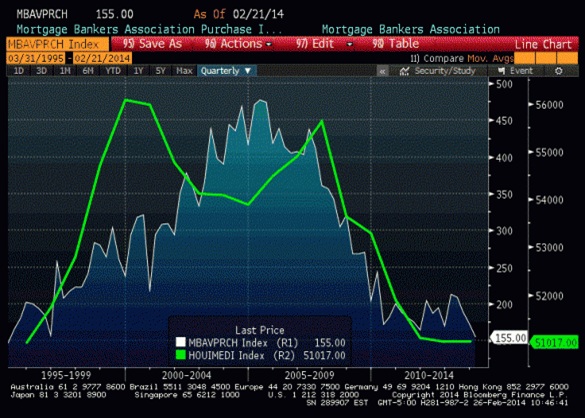 Housing starts and building permits both diminished in January, and sales of existing homes also fell abruptly. However, new home sales actually increased by about 40,000 units in January to the highest level since July 2008. But, and this is a big but, analysts are not sure why this jump occurred since the consensus prior to the report being made public called for a decline. Monthly new home sales figures are often quite volatile, so January’s numbers could be revised downward in coming months.

Sales of existing homes fell 5.1 percent in January, the lowest since July 2012. While most analysts blamed the decline on the severe weather in January, data from the National Association of Realtors showed that sales fell in all four regions of the country, including the West where weather was not a factor.

The overall numbers point to a clear sign of weakness in buyer demand heading into the usually busy spring housing season.  We will be watching this closely as it develops.

Higher interest rates have also pushed home refinances way down from their boom levels, causing many banks to fire employees. Applications to refinance homes were expected to rise this year, but they are now down over 15 percent from a year ago.

This clearly does not bode well for a so called “economic recovery” that has seen the Fed in the US reduce the overall bond buying program by $20 billion dollars per month in 2014 alone, which in essence is pointing directly at higher interest rates ahead.

Too Big To Fail Is Now Bigger Than Ever

During the last great financial crisis we learned about a vast problem which has such far reaching consequences it even dips right into the heart of why I personally hold silver bullion in my portfolio. This problem remains today and far worse than before and you might have heard it referred to as “Too Big to Fail.”  The fact is that banks have become so egotistically bound to this premise that they indeed believe they are "too big to fail". 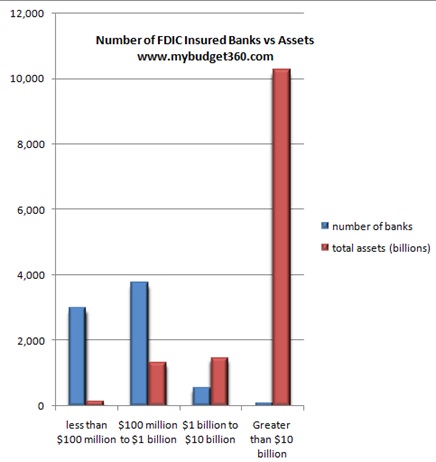 The too big to fail have gotten even bigger (See chart above) in the latest crisis.  Over $10 trillion of all banking assets sit with a handful of the over 7,500 FDIC insured banks in the United States.  Instead of using the crisis to make the too big to fail smaller the government in conjunction with Wall Street has made the big banks even bigger with more taxpayer protection. MyBudget360.com

Some attempt has been made to keep a more regulated, impartial and unbiased eye on these institutions such as the Dodd Frank bill and CFTC reform on things like position limits but these efforts have been met with nothing but backlash and red tape in their attempts to quell this unsubstantiated growth and very intended side effect of increased “paper” control on world markets.  It is like a terrible nightmare being realized as not one but literally several Godzilla’s in the form of banks descend on the world in hopes of complete domination.

So, it should not come as a surprise that these banks are now much larger than they were back then.  In fact, the six largest banks in the United States (JPMorgan Chase, Bank of America, Citigroup, Wells Fargo, Goldman Sachs and Morgan Stanley) have collectively gotten approximately 40 percent larger since the last financial crisis.

They have completed this task against a back drop, at least in the US, of pain and loss for the smaller very easy to fail institutions run by local companies.  As we report on a weekly basis, no less than 1,400 smaller banks have gone out of business since that disaster of 2008 and I urge you to take a guess how many banks have actually opened in the US (spoiler alert if you read ahead-now think at a reasonable number and I would not hesitate to assume most will be wrong). According to this Wall Street Journal article only one new bank has been started in the United States in the last three years.  The problem is now much worse than it was back in 2008.

JPMorgan Chase alone is now approximately the size of the entire British economy and I could go on and on about the rest suffice it to say this is a unrequited problem.  You know it and I know it.  Will it impact us differently in different parts of the world?  Yes, but only to the extent that we have exposure to the toxic assets, mostly on paper, that these institutions continue to create.

It is simple and it is easy to offset risk by owning easy to hold assets like gold and silver bullion and they make sense, especially at a time when we are being lied to so frequently about the true state of the global economic picture at present.

In order to see growth debt is almost always necessary.  However, one of the largest financial problems that the world is facing is that there is simply way too much debt.  Never before in world history has there ever been a debt binge anything like this and it is part of the science experiment I have referred to many a times in our seminars that pegs us right square in the middle of a guinea pig cage rolling around in hay awaiting to be shot into outer space to see what happens!

You would have thought that we would have learned our lesson from 2008 and would have started to reduce debt levels, especially in the US. The truth is though that we have instead pushed the accelerator to the floor and we are now travelling down Route 66 at about 200 mph thinking we are on the autobahn.

It sounds farfetched given the tumultuous hardships we have faced in North America, let alone the rest of the world, but according to the Bank for International Settlements the total amount of debt in the world has increased by more than 40 percent since 2007 and now totals over $100 trillion dollars.

When the first signs of financial disaster were looming over our heads what did most governments do?  They didn’t take the offensive. They took the defensive and scurried into the corner to rest in fetal position while the puppeteers at the top

borrowed to pull their economies and their TBTF institutions out of recession utilizing record low interest rates.

The $30 trillion debt increase from $70 trillion between mid-2007 and mid-2013 compares with a $3.86 trillion decline in the value of equities to $53.8 trillion in the same period, according to data compiled by Bloomberg. This is such a scary statistic.  Please read the last paragraph twice!

That is a formula for absolute disaster, and yet we can’t seem to help ourselves.  Of course the US government is the largest offender.

Back in September 2008, the US national debt was sitting at a total of approximately $10 trillion dollars and if you look today the total debt figure is $17.5 trillion, an increase of 75 percent.  Is there anyone out there that can possibly conceive of a way that this ends other than gravely?  You had better own some gold and silver bullion for certain.

Most people simply do not comprehend that over the past couple of decades both Bay Street and Wall Street (and most of the other major G8 economic centres) have been transformed into the largest and wildest casinos on the entire planet.

Nobody knows for sure how large these casinos have become and nobody knows to what extent one depends on the other.

During the next crisis several institutions could fail simultaneously and if that happened it would be an understatement to say that we would be facing an "economic collapse".

It is absolutely inexcusable how reckless not only governments have become in allowing this conundrum to form but also how these big banks have been allowed to build their business.

When this day arrives, and the US dollar loses reserve currency status, the shift in our standard of living is going to be dramatic.  Some estimates peg the cost of living at as much as 4 times higher in the near future if another economic collapse happens.

Unfortunately, we didn’t learn any of the lessons that we should have learned from the last financial crisis, and our politicians and the central banks have just continued to do the same things that they have always done.

Those that continue to do the “same old things” and invest the same way as before could pay an extremely high price.  This is the time to hold quality assets like physical gold and silver bullion.  I am not afraid to admit I hold these assets and despite what you might think you know, try to remember there are always two sides to every story.  Due diligence on precious metals assets will lead you right to the buyers table.

Yours to the penny,