Fannie Mae and Freddie Mac overseer, the Federal Housing Finance Agency (FHFA), has asked the public for input regarding the fees those government sponsored entities charge to lenders. …

Fannie Mae and Freddie Mac overseer, the Federal Housing Finance Agency (FHFA), has asked the public for input regarding the fees those government sponsored entities charge to lenders.

It is amazing how many people think banks decide whether to lend them a home, and that banks are the principal entities that lose money if they don’t pay their mortgage.

In truth, the federal government, not banks, supports some 90% of the mortgage market and the bulk of that support comes from Freddie and Fannie. Most banks wouldn’t think of giving you a loan these days without the government standing behind it. Or, put differently, they would charge you considerably more for your loan — so much that you would most likely decide to rent instead.

The FHFA halted those increases in 2014 after some observers argued they were putting mortgage rates out of reach for many people.

While the original idea in hiking the fees was to wean the mortgage market off government support, there has been increasing pushback from liberal groups, who argue there should be a strong government role in helping people buy homes.

That same pushback played a strong role in slowing momentum for proposed legislation known as Johnson Crapo, that would wind down Fannie and Freddie. The bill has the all-but-official backing of the Obama administration, but many prominent Democrats, including Sens. Elizabeth Warren (D., Mass.) and Chuck Schumer (D., N.Y.) have opposed it.

The g-fee debate is a much smaller issue, but it’s also easier to understand: Should the government make it more affordable for you to own a home or not? If you want to weigh in, you must do so by Aug. 4. 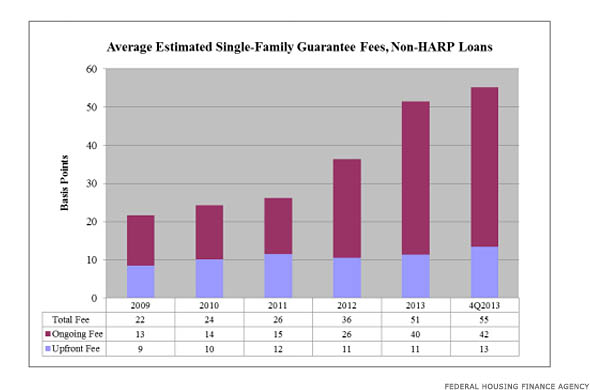