House flipping on the whole has eased over the year across the U.S., save for when it comes to luxury properties. RealtyTrac reports that the practice, which is …

House flipping on the whole has eased over the year across the U.S., save for when it comes to luxury properties. RealtyTrac reports that the practice, which is defined as buying a home and then selling it within six months after improvements have been made, accelerated by 350% in the last year in the market for homes priced between $2 million and $5 million. Hot markets for this kind of high-end flipping include the New York metro area along with Los Angeles, San Diego, San Francisco and San Jose. Analysts say profits on these flips increased to around 12% over the last year. For more on this continue reading the following article from TheStreet.

The business of "flipping" homes is increasingly becoming a high stakes game.

But the number of flips of high-end homes, some with a multimillion dollar price-tag, are up sharply from the year earlier.

A total of 968 high-end homes nationwide were flipped in the third quarter, down 13% from the previous quarter but up 34% from a year ago.

The majority of these flips took place in the New York Metro area and the four coastal California markets of Los Angeles, San Francisco, San Diego and San Jose.

Due to the heightened activity in the upper-end of the market, the average gross profit made by real estate investors rose 12% year-over-year to $54,927.

"Increasing home prices over the past 18 months combined with decreasing foreclosures have created a market less favorable to the high quantity of middle- to low-end bread-and-butter flips that we saw late last year and early this year," said Daren Blomquist, vice president at RealtyTrac in a statement.

Home flipping decreased substantially from a year ago in several former hot spots such as Phoenix (37% decrease), Tampa (47% decrease), Orlando (28% decrease), and Stockton, Calif. (down37 %).

But "the sharp rise in high-end flipping indicates there is still good money to be made for flippers willing and able to take on the additional risk of buying and rehabbing more expensive homes," Blomquist pointed out, adding that the average gross profit on each high-end flip is more than four times that of flips in the lower end of the market.

Here are the 15 most profitable markets for flipping in the third quarter, according to Realtytrac.. The list only includes metros with at least 100 flips in the third quarter and where flipping had increased from the previous year sorted by total gross profit, in descending order. 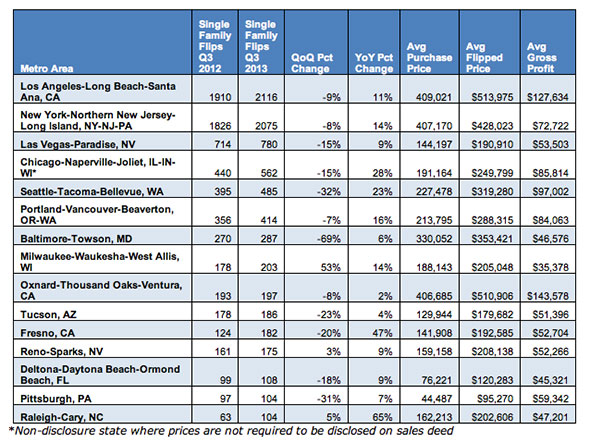