Experts are presently in agreement that the U.S. is in the midst of a housing market recovery, but investors are growing more uncertain by the day of what …

Experts are presently in agreement that the U.S. is in the midst of a housing market recovery, but investors are growing more uncertain by the day of what the future holds. Some believe that homeownership, which is now at the same level as it was in the 90s, will continue to drop as the shrinking middle class forces people to abandon the American Dream. Others believe that the pendulum will be forced in the other direction as more homes become available and values rise. The former feel that investing in real estate trusts will be the only way to hold onto the dream, while the latter fear that apartment value has nowhere left to go but down. For more on this continue reading the following article from TheStreet.

Equity Residential (EQR) and Altisource Residential (RESI) may have similar names, but they offer two radically different approaches to investing in what some believe could be a long-term decline in U.S. home ownership.

As you can see from the chart below, U.S. home ownership levels have returned to where they were in the 1990s — roughly 65% compared to a peak of above 69% in the second quarter of 2004.

The downward trend will continue for many years, argues Bill Erbey, chairman of RESI. (I’ll call it RESI instead of Altisource to avoid confusion because there are three related companies — all run by Erbey — that bear the Altisource name).

"I’m not sure if we go all the way back to what it was pre-World War II, pre the [start] of Fannie Mae and Freddie Mac, which dramatically expanded homeownership, but certainly you’re seeing probably half a percentage point or so of shift from ownership to rental on an annual basis," Erbey told me during one of several interviews for this exclusive profile of the little-known billionaire published last week.

In case you were wondering, before the government created Fannie Mae in 1938, home ownership rates were below 50%. The fact that Erbey would even think about such a massive drop in home ownership is a signal he is predicting an economic and social shift way beyond anything anticipated by most followers of the housing industry. See this interview (separate from the profile) for more of Erbey’s views on housing.

Part of the rationale for Erbey’s view is a belief that the ever-shrinking middle class will keep shrinking until we can retrain the U.S. workforce — something that will take two or three generations at least. But Erbey is also concerned about more restrictive housing policy stemming from the 2010 Dodd-Frank financial reform legislation that will go into effect in 2014. He points to a CoreLogic study in February which argues only 50% of the mortgages being underwritten today will qualify under the new standards for what will be known as a Qualified Mortgage.

One of the shortcomings of Wall Street analysis is that it can be very myopic — or "siloed," in Wall Street lingo. So it is not surprising that when I spoke to three analysts who cover Equity Residential, the nation’s largest apartment REIT, they weren’t focused on the regulatory issue highlighted by Erbey at all. Erbey’s companies — there are five altogether — have been classified by Wall Street as mortgage REITs, and the analysts who follow the apartment REITs belong to a different group.

They don’t listen to Erbey every quarter when his companies deliver earnings. They don’t attend the conferences he and his companies’ managements attend. While they tend to agree home ownership may take a while to reverse its decline, they argue that’s just because people were scared off by the housing crisis, or are increasingly living alone. They don’t see anything nearly as monumental or long-lasting as what Erbey envisions.

The analysts’ more moderate view of the future of home ownership may help explain why Equity Residential and other apartment real estate investment trusts (REITs) like AvalonBay Communities (AVB) and UDR, (UDR) have sat out the broad stock market rally in 2013. These analysts, as a group, play a critical role in helping shape the market’s view of the apartment REIT sector. And that view holds that the present looks great but the future looks scary. 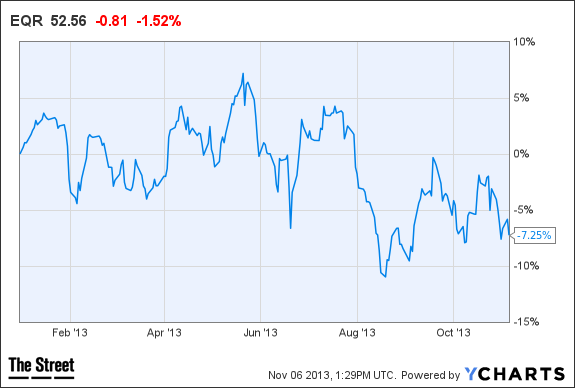 The present: "You could argue right now that the fundamentals have never been better on the apartment side," says Rod Petrik, analyst at Stifel. Equity Residential’s occupancies are at an all-time high and rents have increased by more than 5% for two consecutive years in 2011 and 2012.

The future: Concerns about new supply of apartments in the markets where Equity Residential operates, as well as fears rising interest rates will increase the company’s borrowing costs, have hurt the stock’s performance, Petrik believes. Another factor, he argues, is the fear the pendulum will shift back to people owning homes as opposed to buying them.

That’s right: Many followers of the apartment REIT sector are being driven away by fear of an increase in home ownership — the absolute opposite of what Erbey believes will happen.

David Toti, analyst at Cantor Fitzgerald, admits he hasn’t been following the new mortgage rules, but the notion that the government would enact a rule at this stage in the still-fragile economic recovery that would discourage people from owning homes is hard for him to imagine.

Toti and Petrik have presumably never heard of Erbey, and it is safe to assume that many of the investors who have been selling shares of Equity Residential and the other apartment REITs haven’t either. Meanwhile, though, there are lots of investors jumping in with both feet behind RESI and a related Erbey-run company called Altisource Asset Management (AAMC), which have built their business around the idea of a long-term shift from owning to renting.

Shares of RESI are up more than 70% through Tuesday. Shares of AAMC, which is the asset manager for RESI, are up 742%. RESI acquires non-performing loans, sourcing them through Ocwen Financial (OCN) another Erbey-run company which is the largest servicer of delinquent mortgages in the U.S.

You don’t necessarily have to agree with Erbey that home ownership rates will continue to fall in order to like RESI’s stock. By acquiring property through the purchase of non-performing loans, RESI claims it pays 17% less than it would if it acquired the property upon foreclosure and had to pay brokerage commissions and closing costs.

RESI also makes money by contracting Ocwen to modify the loans or get them current, or it may sell the homes via Altisource Portfolio Solutions (ASPS), a technology company also in the Erbey network. And RESI has a nationwide network of vendors it can use to manage the properties, giving it an advantage over competitors like American Residential Properties (ARPI) and Silver Bay Realty Trust Corp. (SBY) argues Rick Biggs partner at New York-based hedge fund Consector Capital, which owns RESI shares. 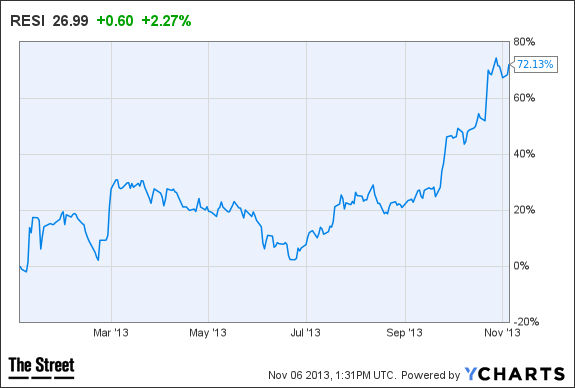 On the other hand, RESI is a wholly untested business model. It just started acquiring nonperforming loans this year, and while it had 6,300 of them as of the third quarter, it will take some time before those loans turn into revenues. Piper Jaffray analyst Michael Grondahl forecasts RESI revenues of just $66.9 million for 2013, climbing to $357 million in 2014 and $476 million in 2015. Credit Suisse analyst Daniel Oppenheim has similar forecasts, but JMP Securities’ Peter Martin has a far more aggressive projection of $938 million. All three recommend the stock, but given that the business is so new and there are really no comparable companies, figuring out how to price RESI’s stock is a challenge. It will eventually trade based on a dividend yield, says Consector’s Biggs, but those dividends are still a few years away from anything that might be considered a "normalized" level.

But of course, as is so often the case in investing, if you wait until RESI’s business model is proven, you may lose most of the upside. On the other hand, if you like Erbey’s thesis — that we are turning into a nation of renters — but are uncomfortable backing his unproven model, the beaten-down apartment REIT sector may be an attractive play.