Americans will likely have to wait at least three more years before it becomes any easier to get a mortgage. That’s how long it will take, at a …

Americans will likely have to wait at least three more years before it becomes any easier to get a mortgage.

That’s how long it will take, at a minimum, for Congress to reach agreement over the future of Fannie Mae (FNMA) and Freddie Mac (FMCC) , according to a report published earlier this week by Keefe, Bruyette & Woods (KBW). Fannie and Freddie, which are government sponsored enterprises (GSEs), typically guarantee nearly half of U.S. mortgages outstanding. Since the 2008 financial crisis, the percentage is even higher.

Banks are reluctant to lend because, following the crisis, they were forced to repurchase billions of dollars of bad mortgage loans they sold to Fannie, Freddie and private investors. Banks are afraid the same thing will happen again if they loosen their standards, so it’s easier for them to say no. Attempts to fix the situation have stalled in Congress, and few think anything will be done until there’s a new president.

"We continue to think it highly unlikely Congress finishes a GSE bill in 2015 or 2016. We think 2017 is the earliest such a bill could be passed and even that prediction is on the optimistic side," the KBW report concludes.

One measure of how difficult it has become to get a mortgage came in August from the Federal Reserve Bank of New York. Its second quarter report on household debt and credit showed new mortgage originations at their lowest level in 14 years even as interest rates declined and new home purchases rose.

Data from the Mortgage Bankers Association tell a story that is only slightly more positive about the availability of credit. The organization’s Mortgage Credit Availability Index (see graphic below) hit 116 in September, and is essentially unchanged since the 2008 crisis. It peaked at nearly 900 in 2006.

Credit is so tight that even former Federal Reserve Chairman Ben Bernanke can’t refinance his mortgage, even though he earns a reported $200,000 to $400,000 for a speech. 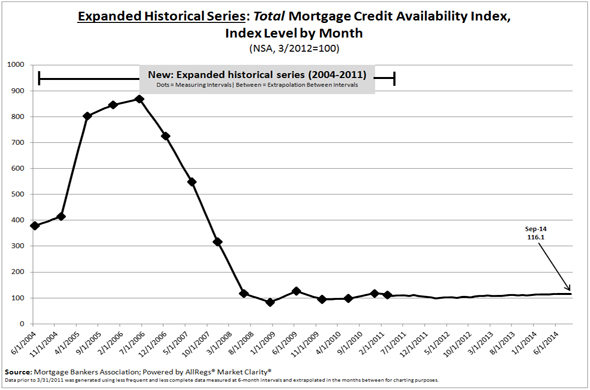 It’s not just banks that are behind the difficulty. Bond investors, who banks rely upon to get mortgage risk off their books, also remain gun-shy. Writing in Barron’s in April, Pimco CEO Douglas Hodge complained of servicers and trustees that didn’t live up to their obligations to protect bondholders’ rights, and government settlements that allowed banks to "resolve their liability associated with their own abusive origination and servicing practices without actually paying for it."

Hodge added: "The private mortgage markets will not attract meaningful new capital until institutional investors, such as Pimco on behalf of its clients, are assured that these egregious practices will stop and never happen again."

While bipartisan legislation introduced by Tim Johnson (D., S.D.) and Mike Crapo (R., Idaho.) passed the Senate Banking Committee this year, it is widely seen as dead due to opposition from several key senators. Among those who opposed the bill are Sen. Sherrod Brown (D, Ohio) and Sen. Richard Shelby (R., Ala.). KBW believes Brown and Shelby are likely successors to Johnson, who will not seek re-election. The senators rejected the legislation for different reasons, which suggests creating a new bill will not be easy, not to mention actually turning it into law.