Need to Balance Your Bullion? How To Start Investing in Platinum

Gold has long been the most popular precious metal to invest in, followed closely by silver. These two metals make up a large proportion of the global bullion …

Gold has long been the most popular precious metal to invest in, followed closely by silver. These two metals make up a large proportion of the global bullion market, dominating investment despite their differences in value and volatility. Together, they allow investors to balance their portfolios with long and short term investments, but there is now a growing number of investors who are turning away from this traditional approach and looking into other precious metals as investments. The main player in this alternative market is platinum, but what it is about this metal that would make it a good choice as an investment?

What You Need to Know

Platinum is a very rare precious metal that occurs naturally in Africa, Columbia, Russia and the western United States. It has an extremely high melting point of 1,768 degrees Celsius, over 700 degrees higher than that of gold, which is why for centuries it was thought to be useless for trading. It wasn’t until the late 18th century that scientists succeeded in refining platinum, using extremely complicated methods that involved dissolving it in nitric and hydrochloric acid, or fusing it with arsenic. Today, innovative technology allows refineries to create incredibly fine platinum, although they still take inspiration from the original 18th century methods.

Platinum is part of a group of metals that also includes palladium, ruthenium, rhodium, iridium, and osmium, and out of these it is by far the most popular for investment purposes. Platinum’s rarity makes it an excellent choice for investment, as only 8 million ounces are produced in the world each year – approximately 10% of the annual gold production. There is uncertainty about the future production of platinum, which could make it incredibly valuable in the future. The increased demand for platinum in recent years also adds to this.

Just like gold and silver, platinum prices tend to rise at time of economic and political uncertainty, along with demand for investments that are free from counterparty risk. The price of platinum shadows the price of gold, sometimes being a little above it and sometimes a little below. In 2014, platinum prices rose to 116% of the gold prices, while in 2016 they dropped to 74%. The platinum price is affected by other factors that are less likely to affected silver and gold, such as the production levels of particular industries. It follows similar patterns to both of these metals, but is also affected by automobile production and usage, as it is in high demand in this industry especially.

The relatively low price of platinum in recent years is likely to be a significant factor in the increase in demand for it as an investment metal. Platinum prices have become increasingly volatile in recent years, fluctuating almost as much as those of silver, so investors should remain well aware of this. Just as with silver investment, platinum investment requires a great deal of watching the market and waiting for the right times to buy and sell. 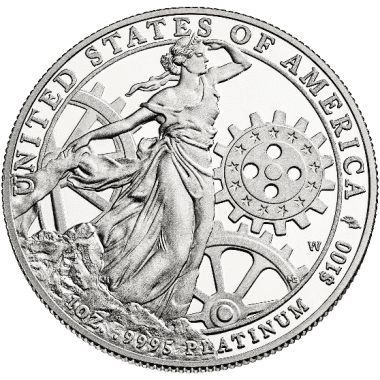 There are several different ways of investing in platinum, and which one suits you best will depend on your experience of investing and of precious metals. One way to invest is to buy physical platinum from an authorised supplier, and store it securely in a vault or safe. This gives the advantage of holding your platinum as a physical asset, which protects your investment from economic downturns. It also allows you to build a portfolio of bullion, balanced with gold and silver, which you can sell when the time is right for you.

Other ways to invest in platinum include buying stocks, futures and ETFs, which do not mean owning precious metals in a physical sense, but rather own shares of a mining company or ‘paper’ platinum. These options may be preferable for investors who have experience of the stock market and are confident traders, especially if you wish to buy and sell multiple times within a short period of time. These options do carry some counterparty risk, as they involve investing in companies rather than in physical platinum. Those looking for a longer term, lower risk investment should consider physical platinum as an alternative.