It is no longer news that the North Sea’s oil sector has been in enmeshed in a predominantly declining trend for much of the last ten years. Last … 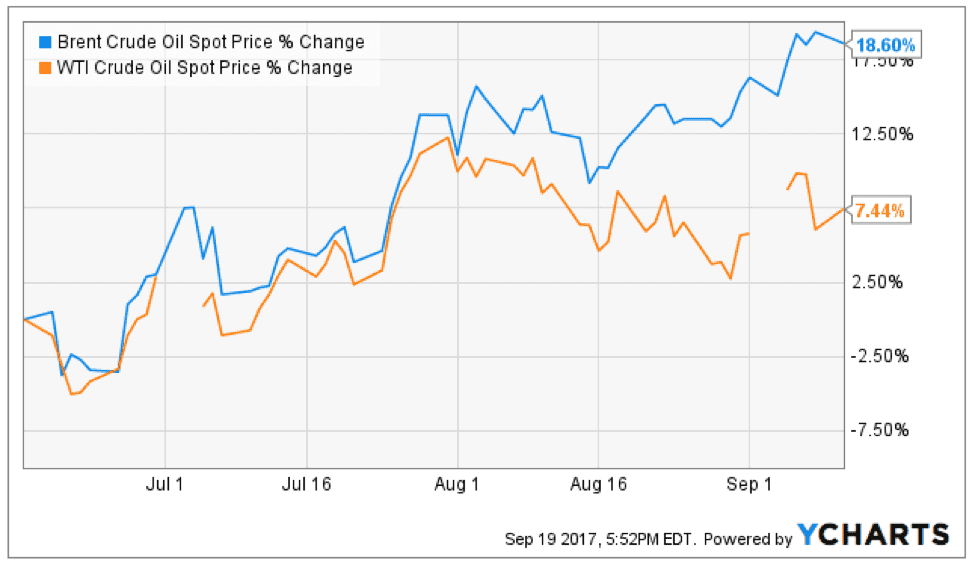 It is no longer news that the North Sea’s oil sector has been in enmeshed in a predominantly declining trend for much of the last ten years. Last year, industry insiders warned that the UK’s offshore oil and gas industry was losing its relevance as oil prices continue to fall. However, it appears that the erstwhile forsaken North Sea is coming up as an unexpected investment hotspot as the global energy industry starts to recover.

Oil prices are starting to move up as the global Brent benchmark trades up around $55.37 per barrel while the West Texas Intermediate comes up around $49.48 per barrel. In the last three months, the Brent Crude has booked 18.60% gains and the West Texas Intermediate as booked 7.44% gains as shown in the chart below. This piece provides insight into the ongoing revival in the North Sea’s energy industry amidst a recovery in the global energy markets.

Investors are buying up assets in the North Sea rapidly

In August, Total SA spent about $5billion to buy A.P’s Moeller-Maersk oil and gas business front on the North Sea. BP says it will increase its investments in the North Sea in order to double production from the region by 2020.  Royal Dutch Shell has revealed that it plans to spend between $600M and $1 billion on assets in the North Sea in the next couple of years.

More so, private equity funds have pooled a combined $15B purse that will be used to make strategic acquisitions in the North Sea.  Private equity funds are particularly optimistic about the North Sea energy sector because they could buy up aging infrastructure and assets, which are no longer attractive to established players in the industry.

Here’s why the North Sea is on the investment radar

The North Sea has the potential to deliver oil output in similar amounts to what is available from Saudi Arabia oil fields but the weak oil prices have forced many producers out of the region in the recent past. Anthony Graham, an energy industry consultant for SNP Investments notes that the oil and gas industry in the North Sea provides a decent window of opportunity as oil prices begin to stabilize globally.

Fortunately, the weak oil prices that forced producers out of the North Sea also forced them to start looking for ways to cut production costs, renegotiate service contracts, and increase an already-shrunk margin. Now, the average production cost has dropped to about $15 per barrel down from $30 in 2014. Hence, at $55 per barrel, pumping out from the North Sea is starting to look incredibly attractive to proactive energy firms. Going forward, we can expect an increase in the interest to produce oil from the North Sea as crude oil prices continue to rebound.