The 10-yr treasury bond yield rates seem to predict a weak economy for years. Last month’s Fed meeting minutes clearly indicated that the economy wasn’t looking so hot even before the U.K. surprisingly voted to leave the European Union.  The new world of low yields presents plenty of challenges.

To most people’s surprise, interest rates that were already low at the beginning of this year have continued to fall.  Although the latest U.S. jobs report was more optimistic, labor markets had largely remained weak versus expectations during the first half of the year, and economic growth remained stubbornly slow.

Jobs News May Embolden the Fed – a Little

The U.S. is recently adding jobs at a healthy rate, and the unemployment rate is relatively low.  But economic growth remains stubbornly slow, largely because of the struggling energy sector and the resultant decline in business investment.  Gross domestic product (GDP), the broadest measure of goods and services produced across the U.S., grew at a seasonally and inflation-adjusted annual rate of just 1.2% in the second quarter, the Wall Street Journal recently reported.  While jobs-for-capital investment may not seem like such a bad trade, business investment usually acts to spur employee productivity – which has grown at an anemic pace in recent years.

As a result of this slow-go economy, the Fed recently lowered its projections for rate hikes over the next few years.  The July jobs report may strengthen the central bank’s resolve to resume increases in its benchmark rate before the year is out, but financial markets are predicting a weak economy for years – and so far they’ve been correct about interest rates.  The primary culprits are not only reduced business investment, but also a large paring back of inventories and declining government spending.

The long-term trend of lower growth has been in place since the beginning of this.  In the United States, per-person gross domestic product rose by an average of 2.2 percent a year from 1947 through 2000 — but starting in 2001 has averaged only 0.9 percent. The economies of Western Europe and Japan have done worse than that.  So far, very few are predicting that this trend is about to reverse course. 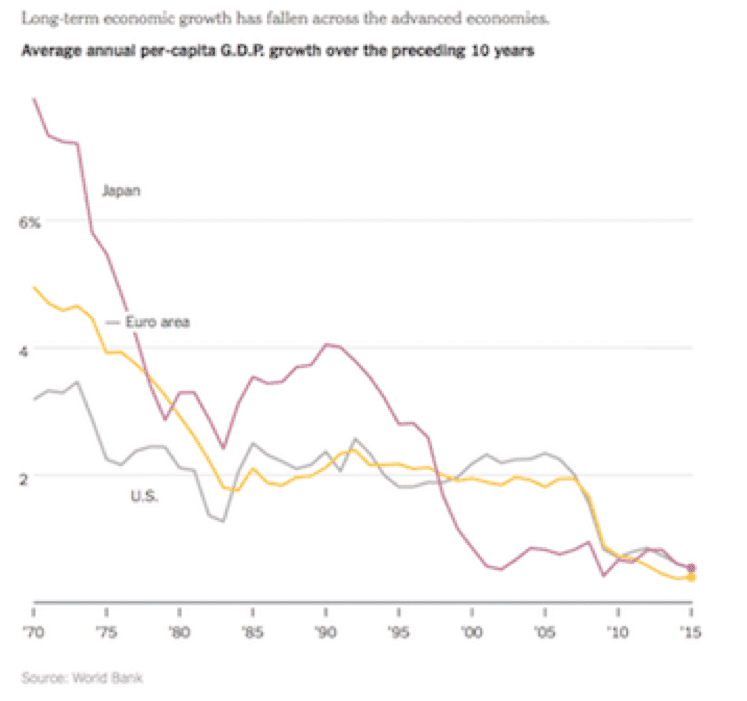 Some observers worry that there seem to be weakness in both supply and demand, and that the two are pushing each other in a vicious circle.  Weak productivity and fewer workers are hits to the “supply” side of the economy, while the efforts of central banks to stimulate demand have only been partially effective on the “demand” side.

Lawrence Summers, the Harvard economist and former top official in the Obama and Clinton administrations, argued a few years ago that the global economy might be settling into a state of “secular stagnation” in which there was insufficient demand, and resulting slow growth, low inflation and low interest rates.  His diagnosis is that “lack of demand creates lack of supply;” people may have dropped out of the labor force because their skills and connections have atrophied, and companies may be reluctant to invest because they’re not convinced that demand is really there for their products.

Mr. Summers proposes that government sharply expand investment in infrastructure, which might help both demand and supply – building workers may become re-attached to the work force, for example.  Interestingly, this year increased infrastructure spending is an economic policy advocated by both Hillary Clinton and Donald Trump.

For investors seeking healthy yields, there are no easy answers.  Even among private equity firms focusing on leveraged buyouts, soaring stock markets and intense competition for deals have made it harder for those firms to reap big profits.  “Right now, it is tough to earn returns of 20% or more in the private equity business,” Carlyle Group co-founder William Conway recently said.  Others have concurred.  “They are afraid and they are pulling back,” said Laurence Fink, CEO of BlackRock, in discussing how investors no longer know what to do with their money.

As a result, some investors have been turning to commercial real estate because of its potential to generate higher returns.  Commercial real estate fundamentals — such as demand, occupancy and rents — remain strong, which has kept property values up in the private market, said Steven Marks, a managing director at Fitch Ratings.  Even with commercial real estate, though, because of the supply constraints currently found in some markets, acceptable investment return rates may well be increasingly driven by value-add strategies rather than merely well-timed property acquisitions (which are increasingly difficult anyway).  In more stabilized markets, the execution of business plans based on property upgrades or operational improvements becomes of heightened importance.

Private investments in commercial real estate are subject to significant risks.  All of the investments listed by RealtyShares, for example, are private offerings (exempt from registration with the SEC), so the disclosures are generally less detailed than an investor would typically expect from a registered offering.  The offerings are also illiquid, and the value-add strategies often seen in RealtyShares listings require significant market expertise by the real estate companies sponsoring an investment opportunity.  Nevertheless, the famous (and successful) Yale Endowment model has long stressed the importance of alternative assets like real estate. Real estate companies that create value and execute strategically on their business plans can potentially achieve attractive risk-adjusted returns, especially when compared with many other investment options in the new low-yield environment.