The Pentagon has acknowledged the possibility (critics call it a certainty) that $7 billion of Iraqi money seized from the country’s banks may have been stolen, and taxpayers …

The Pentagon has acknowledged the possibility (critics call it a certainty) that $7 billion of Iraqi money seized from the country’s banks may have been stolen, and taxpayers may be responsible for its return. The Iraqi funds were “liberated” during the 2003 invasion when the country’s banking system dissolved, and placed into an account at the Federal Reserve Bank of New York. That money was then flown back into the country to help fund reconstruction costs; however, it now appears little of it was so used. For more on this continue reading the following article from Money Morning.

For nearly a decade, U.S. military operations in the Middle East – Iraq in particular – have been criticized as a cumbersome and costly burden on the American taxpayer.

That accusation gained new credence this week when the Pentagon finally acknowledged that nearly $7 billion of Iraqi oil money might have been stolen.

And what’s worse is that the U.S. taxpayer could end up paying for the mistake.

Following the March 2003 invasion of Iraq, the United States liberated, or seized, billions of dollars of assets from that country. But since Iraq had no banking system, the money – much of which came from Iraqi oil sales – was placed in an account at the Federal Reserve Bank of New York.

From there, large pallets of shrink-wrapped cash were periodically loaded into tractor-trailer trucks, driven to Andrews Air Force Base in Maryland, and airlifted to Baghdad. Some $12 billion of cash was flown to Iraq in the months following the overthrow of Saddam Hussein.

It is not yet 8:00 in the morning, and already the bullhorns are active. Organizers are chanting out instructions just out of sight, and music is blaring from loudspeakers somewhere in the distance.

I notice that there is absolutely no traffic on the streets. Strange for Panepistemiou – normally one of the busiest thoroughfares in central Athens. Our hotel is a few blocks from Syntagma Square, located in front of the Greek Parliament.

A pause descends. The sudden quiet hangs uneasily over everything.

Thousands and thousands of them.

Walking straight down the middle of the street, in defiance of cars, shop owners, the on-looking police…

Welcome to another day of protests in Athens.

The Debt Situation Gets Worse by the Day

The austerity measures proposed to curb a crushing debt crisis will fall hardest on those who can least afford it. They focus their ire on the politicians – hence the reason for yet another march to the Square.

This one, at least, is peaceful, unlike some others late last week. Then, frustration flowed into anger, and anger into bloodshed. Today, however, one can get around in this eerie neverland between normalcy and chaos, if only on foot.

Decisions made over the weekend – primarily the German decision to support another E.U. bailout – will buy some time. But the debt problem is getting worse.

Already, the almost-unanimous consensus among analysts is that the current remedies are insufficient.

The mountain of debt and another accelerating constriction in credit are once again raising red flags in Rome, Dublin, and Lisbon. And that means contagion renews as a concern for all of the Eurozone.

Among the unfortunately tagged "PIGS" – Portugal, Italy (or Ireland, depending on who you talk to), Greece, and Spain – the major concern remains with the last country.

Spain has a far larger European-wide economic impact than Greece. Should it go, the euro does not survive.

Some in Brussels are talking about a worst-case scenario, calling for the sacrifice of Greek stability for years into the future to save Spain. That alternative is not a serious proposal at this stage. Nonetheless, it is hardly lost on the crowd.

"This is Athens, not Madrid," is one of the chants now arising from the protest leaders walking behind their bullhorns.

I will be here for another week. There will be an almost certain collapse of a government and intensifying opposition to the remedies dictated by the E.U. and the International Monetary Fund (IMF), with no assurance that the result will be any better.

One of the consequences of this ongoing crisis, however, already has a direct bearing upon the price of oil.

An Attractive Investment for the Risk-Averse

In the last several years, crude has assumed a dual identity.

It remains a commodity produced, refined, and used as a fuel (the "wet barrel"). But it is also a financial asset in its own right (the "paper barrel" futures contract). It is tradable, fungible, and, most importantly, a store of value.

As the debt problem worsens here in Greece, and cracks expand elsewhere in the currency fabric of a union progressively under siege, transfers of liquidity are expected in a feverish pursuit of risk avoidance.

Which leads us back to crude oil.

Despite being of slightly better quality, WTI has traded at a discount to Brent since last August. One of the reasons for the spike in the price of Brent, while the price of West Texas Intermediate (WTI) in New York moves down, involves what each benchmark represents.

Some of that results from huge surpluses piling up in Cushing, Oklahoma (where pipelines intersect and the NYMEX rate for WTI is determined). Yet the primary reason emerging over the last year for the reversal in the WTI-Brent spread is a more fundamental one: Brent now reflects the global oil market much better than WTI does.

Regions trading crude more sour (with higher sulfur content) than the benchmarks price it at a discount to Brent, rather than to WTI.

Being a better blend actually works against WTI.

In this environment, a Europe facing cyclical bouts with inflation and deflation scares becomes a ready-made market for replacing control over crude futures for other assets under pressure. After all, the trade in oil remains dollar-denominated, and the Eurozone has had considerable experience in parlaying a weaker greenback (needed to purchase the raw material) with the euro-denominated base of selling retail oil products.

That has resulted in oil becoming the attractive new asset investment for those in Europe seeking to spread out risk.

And the longer the debt crisis intensifies, the greater that attraction.

Expect Two Things from This Development

First, aside from the occasional vacillation, the volatility-generating spread between Brent and WTI will remain at high levels, with a decisive nod to Brent on the upside.

Second, the inflationary pressures building in Europe with each new bailout will only make that spread more attractive. The former "seigniorage" advantage to dollars from oil trade (petrodollars remaining abroad, not repatriating, and, thereby, not providing inflationary pressure in the U.S.) will slowly give way to Europe beginning to export its inflation to the states.

That’s because Brent will become the lead partner in redressing its spread with WTI. In other words, as that spread narrows, WTI will come up in price; Brent will not move down.

Any way you look at it, the Brent premium will continue to serve as an attractive magnet for the repository of asset value.

Back in Athens, even after a 40-year absence since my time living here as a student, I am finding my Greek is coming back. That may be a mixed blessing.

Going to dinner tonight, I started reading the graffiti spray-painted on buildings a few steps from our hotel entrance. One caught my eye.

It read simply: "This is war."

I wonder what next week will bring… 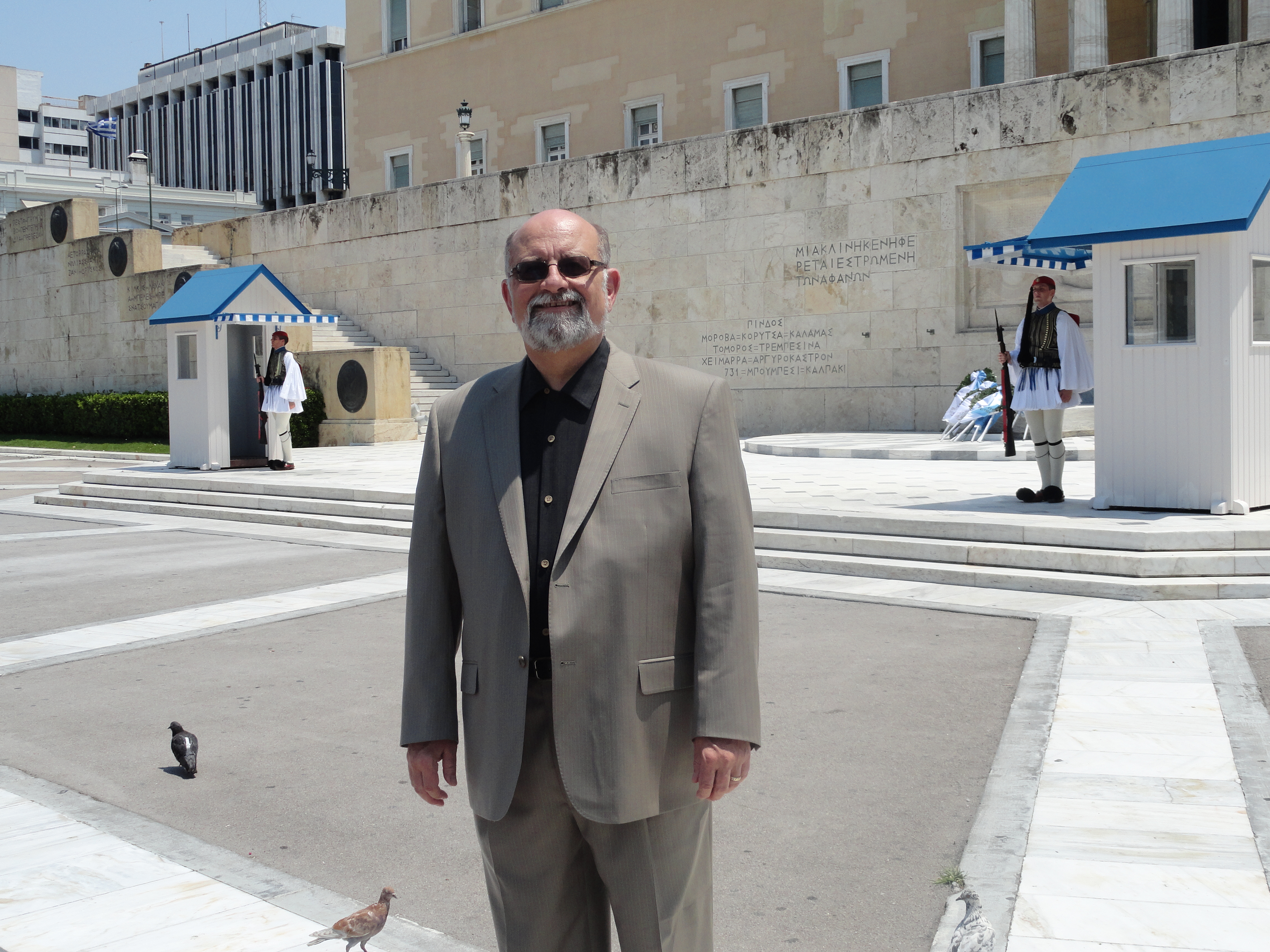 Behind me is the Parliament Building in Athens. It’s right across the street from Syntagma Square, a magnet for protesters, where a number of activist groups and associations have now establisheda "permanent" presence.

This photo was taken yesterday. Sundaysare the safest time to go down there (and take photos), since in this Orthodox country there are no demonstrationson a Sunday (unless mattersare really about to explode). But onSaturday, this place was swarming, with almost 1,000 soldiers and police and as many as 100,000 protestorsin the Square below and the street above.


This article was republished with permission from Money Morning.