Stripe Reaches $95 Billion Valuation But Are We About to See The World’s Largest IPO?

After a year of feverish investor excitement surrounding IPOs, payments platform Stripe looks set to capitalize on investor confidence and go public in what may become the biggest …

After a year of feverish investor excitement surrounding IPOs, payments platform Stripe looks set to capitalize on investor confidence and go public in what may become the biggest initial public offering of all time.

Although there had been speculation about Stripe’s listing stemming back to mid-2020, the company has refrained from entering the public market. Speculation about the future of the company had been rife after Stripe appointed CFO Dhivya Suryadevara from General Motors in August. However, the payments giants opted to generate an additional $600 million in equity from institutional investors – paving the way for a valuation of $95 billion.

Significantly, Stripe’s valuation of $95 billion has paved the way for the company to become the most valuable US startup today, surpassing the likes of key players in their respective industries in Instacart and the much talked about SpaceX. Perhaps most significantly of all, the valuation also paves the way for Stripe to have the biggest IPO of all time.

Stripe’s rise to dominance is spectacular for a company that was founded in 2010, but one of the biggest driving forces behind the payment firm’s astronomical evaluation stems from a market that’s been struck by IPO fever.

In the past 12 months, the rise of blank-check SPAC companies has paved the way for the volume of IPOs in the US to double to 494 – raising a collective $174 billion in the process. Today, with Stripe set to finally go public, we could see the largest IPO yet.

In going public, Stripe will be set to follow in the footsteps of 2020’s high profile IPOs from leading tech companies like Snowflake, Airbnb and Rocket Companies – all of whom contributed to 150% growth in money raised in comparison to that of 2019.

In many regards, the timing of Stripe’s IPO couldn’t be better. Over the past year, something of an IPO fever has taken hold, and it’s showing little sign of slowing down in 2021. In fact, Q1 of 2021 has shown global dealmaking has grown to $1.4tr – owing in no small part to blank-check SPACs and widespread investor enthusiasm for IPOs based around tech and sustainability companies. 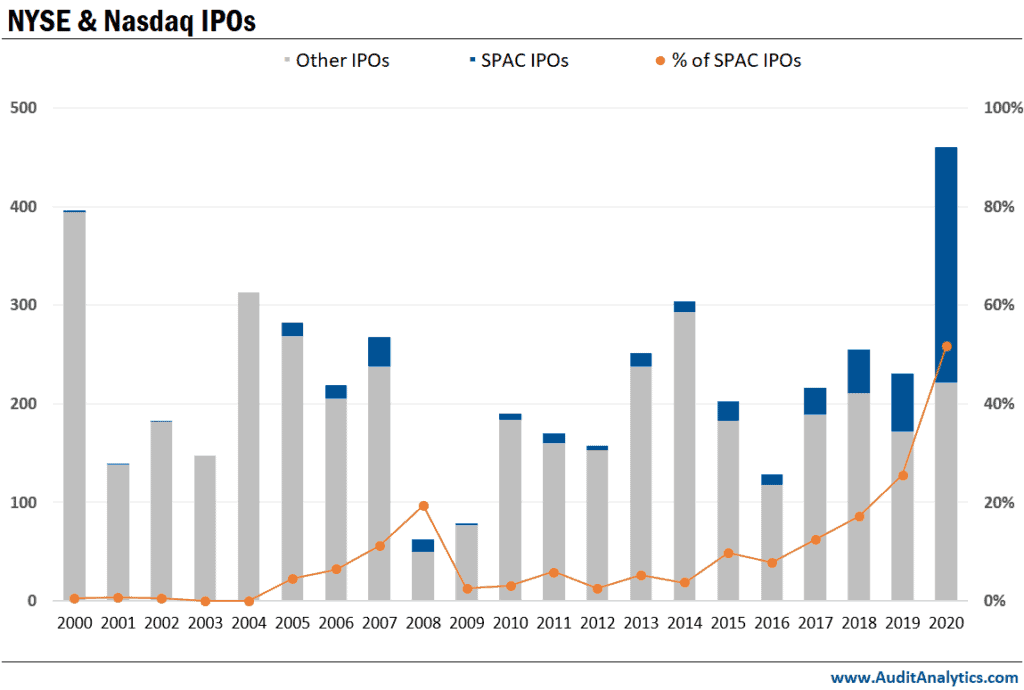 As we can see from the chart above, IPOs on US markets have risen to levels that haven’t been seen since the height of the dotcom boom. One of the most significant reasons behind these figures comes from the unprecedented rise of special-purpose acquisition companies, known as SPACs, which provide private companies with the chance to safely enter public markets.

The proficiency of SPACs has helped to propel equity capital market fees up by nearly 340% in Q1 of 2021 as opposed to the same period from last year to a total of $13.1bn. This is more than double the revenues in any Q1 over the past two decades.

The question that many will want to know the answer to revolves around whether Stripe is heading for a record-breaking IPO, but sadly this will depend on a few factors. Significantly, the title of the ‘world’s largest initial public offering’ is determined by the size of the deal, not market capitalization. The current record holder for the largest IPO belongs to Saudi Aramco, which raised as much as $29.4 billion in a home-country listing. In the US, the largest IPO belongs to that of Alibaba, which debuted at $25 billion.

Yes, Stripe’s $95bn valuation means that it has the potential for a record-breaking IPO, but it’s unlikely that enough shares will be made available for such a scenario to occur. It’s likely that Stripe will look to generate follow-on offerings for insiders after the initial lockup period is over between three and six months from the IPO date.

How Investors Can Buy Into The Stripe IPO

Although the temptation of buying into the world’s largest IPO may hold appeal for retail investors, the process of buying into initial public offerings like that of Stripe can be hard for investors to do. This is because most companies look to institutional investors to buy high volumes of shares in fewer transactions.

Maxim Manturov, Head of Investment Research at Freedom Finance Europe, says that: “Historically, institutional investors get around 90% of all shares, with only around 10% left for retail trades. This is where allocation comes from: when the demand is high, the broker will have to reduce order amounts so as to at least partially fill all of them. The allocation ratio, meanwhile, depends on the investor trading activity and volume.”

Despite this, there are still chances to get involved in initial public offerings. Some online brokers allow retail investors to take part in IPOs. However, there’s generally a vetting process to go through and a financial threshold to meet.

Although buying into Stripe’s IPO itself may be just out of reach for retail investors, there’s every chance to buy stocks in the company once it arrives on the New York Stock Exchange. Given the tangible excitement flooding the IPO market today, Stripe’s entry into the public domain may be a memorable one for all involved.

Dmytro Spilka is a tech and finance writer based in London. Founder of Solvid and Pridicto. His work has been published in Investing.com, IBM, Investment Week, FXStreet, Entrepreneur and FXEmpire.