Top DAO Coins to Buy During This Dip

DAOs (Decentralized Autonomous Organizations), according to the technical definition, are social organizations that are represented by rules which are encoded as transparent computer programs. DAO crypto tokens are … 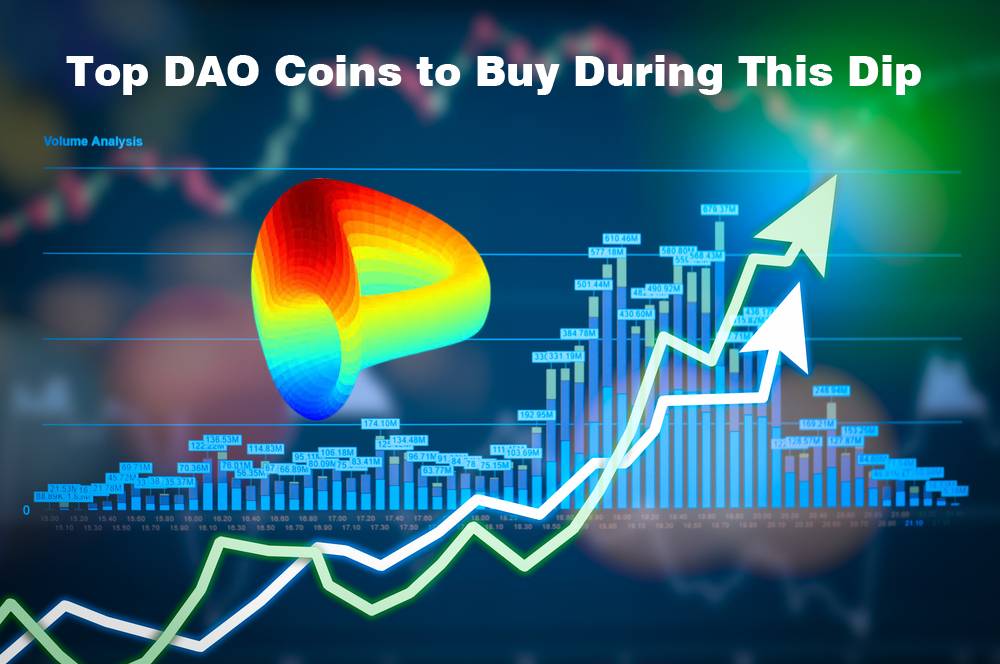 DAOs (Decentralized Autonomous Organizations), according to the technical definition, are social organizations that are represented by rules which are encoded as transparent computer programs. DAO crypto tokens are used for many purposes like investment, buying or crating NFTs, charity, fundraising, and much more.

DAO has seen popularity with utility and holds a promising future. You can start your journey by knowing about top DAO Coins to buy during this dip. DAO is a simple term used as a digital community of like-minded people with a shared bank account.

These people come together to establish a mission and form a group. They then discuss how to fund their DAO’s mission.

The DAO was an early repetition of the modern decentralized autonomous organizations. People who owned DAO tokens could profit from the organization’s investment by benefitting from the price appreciation of the respective tokens or reaping dividends.

Soon after token sales, some developers expressed concern about a bug in the DAO’s smart contracts that could allow harmful actors to drain its fund. This incident led to changes made in the way DAO was dealt with. The DAO was a project founded in 2016 that ultimately had some shortcomings that led to a split of the Ethereum network.

What is DAO Tokens?

DAO exists as a set of contracts that is on the Ethereum blockchain. The prices are measured in market capitalizations like any other crypto. It doesn’t have a physical address or formal rule of management.

DAOs have built-in treasuries, which are only accessible only with the approval of their members. These decisions are made through proposals the group votes on during a specific period. There are various ways to participate in a DAO, but it usually takes place through the ownership of a token.

DAOs operate through smart contracts that are essentially a chunk of codes that execute automatically whenever a set of criteria are met. Nowadays, smart contracts are developed on numerous blockchains. It’s through these smart contracts, DAO rules are established.

People with a stake get the right to vote and influence how the organization operates. It happens by these stakeholders deciding on or creating a new governance proposal. DAO is completely autonomous as well as transparent. Anyone can view their code as they are built on open-source blockchains.

Significant Steps in the Launch of DAO

Some significant steps occur for the launch of a DAO. These steps are:

Why do we need DAOs?

As a digitally-run organization, Dao has several advantages over traditional organizations. Some of the key benefits are:

DAO was an organization designed to be decentralized and to be automated. It acted as a venture capital fund based on open-source and didn’t have a typical management structure of BODs.

To be fully decentralized, DAO is unaffiliated with any particular nation-state, still using the Ethereum network. The developers believed that they could eliminate human error or any manipulation of investor funds by giving decision-making power to an automated system.

DAO was then designed to allow investors to send money from anywhere anonymously worldwide. DAO then provided those owners with tokens and gave them voting rights. It launched in late April 2016 and raised more than $150 million in funds.

It is crucial to understand that DAO is a much broader term that surpasses many different kinds of businesses and groups. Any two collective can be completely different, but still, both of them can be a DAO. Here are a few examples of popularly known DAOs:

Ethereum and “The DAO”

DAO was earlier named as “The DAO.” Its structure was made of complex smart contracts running on the Ethereum blockchain. All of which were supposed to act as an autonomous venture fund.

The DAO token was sold over at Initial Coin Offering (ICO) and was provided the ownership stake and voting rights in this funding system. But soon after its launch, about one-third of these funds were drained through hacking, making it the largest one to take place in the history of cryptocurrency.

It resulted in the splitting of Ethereum into two chains:

Blockchain is a distributed and open ledger that records transactions in code. In simple words, it’s little like a chequebook spread across uncountable computers all around the world. The transactions are recorded in ‘blocks’ and then linked on a ‘chain’ of the previous cryptocurrency transactions.

With the help of a blockchain, anyone who uses cryptocurrency gets a copy of a unified record of transactions. The software tracks each new trade that takes place, and every copy of the blockchain is simultaneously updated along with the latest information., keeping records identical and accurate.

NFTS, DAO and The Metaverse: The New Dimensions of 2022

2021 has seen terms like NFTs and Metaverse. These terms saw such hype that Facebook even rebranded itself to Meta. 2022 is living up to this hype, and new trends are shaping the blockchain and digital infrastructural technologies in the market.

An NFT (non-fungible token) is data added to a file that creates a unique signature and is marked with a code to differentiate it from any other digital replicas. An NFT can be a tweet, an image file, a song, or any other item in digital format.

A Metaverse is a 3D, online and virtual space concept which connects all users in all aspects of their lives. The idea tries to connect multiple platforms on the internet containing different websites and make them accessible through a single browser.

If you own any digital item in the Metaverse, you need a secure way of showing its ownership. Blockchain helps in providing a decentralized and transparent platform to deal with this issue. The key aspects of blockchain that suits the Metaverse are:

A list of Top DAO Coins to Buy During This Dip

The way DAOs have seen the increase. It’s on the way to becoming the gold standard for projects looking at creating self-sustainable applications and the service around the blockchain industry. It will unlock new opportunities for an average blockchain application user to contribute and vote for non-developmental and developmental changes.

Below is the list of 10 Top DAO coins to buy during this dip and how their members can reach consensus and form decisions. What must be noted is that various DAOs serve different purposes like venture and investment, grants, social and media. These top DAOs are mostly DeFi (decentralized finance) protocols.

Anyone with a UNI token could vote or delegate vote for a development proposal that could alter the infrastructure of the Uniswap Protocol. The introduction of UNI gave the sole responsibility to determine the development decisions to Uniswap.

The governance token holders have collective control over the following resources:

Uniswap is a DeFi protocol used to exchange tokens and cryptocurrencies provided on a blockchain network. As of October 2020, the market capitalization for the UNI token is over $500 millionUniswap aims to create a more efficient market by using liquidity pools instead of serving as a market maker.

Uniswap was estimated as the most prominent decentralized exchange and 4th largest cryptocurrency exchange overall according to trading volume. Uniswap was generating fees of US$2-3 million daily approximately for liquidity providers.

Aave is designed to act as a complete decentralized and secure ecosystem of lenders and borrowers; it offers the users and lenders a passive interest income on the assets, contributing to the liquidity pool. Aave has partnered with many developers like:

MakerDAO raised a total of $54.5M fund over 8 rounds. It is funded by 15 investors, Bloccelerate and Inflection being the most recent investors.

Compound allows you to borrow money by putting other cash as collateral. For example, if you have bitcoins, you can keep them as collateral and get dollars. The compound application is built on Ethereum and thus can’t be censored, making it accessible to anyone over the internet. All calculations are done by thoroughly audited code.

The metric for voting used in SushiSwap Snapshot is SUSHIPWAH. To be an eligible voter, you must hold SUSHI in any of the following means:

DAOs benefit their stakeholders by carrying out corporate operations autonomously by smart contracts. It provides complete ownership on decision-making which respectively can be rewarded on the growth of the DAO.

The legal challenges of DAO are clarified and managed. More and more organizations may adopt the DAO platform for their business. All the factors point that DAO is a safe place to enter. It allows the organization to break free of reliance on traditional institutions.

Designing an excellent DAO involves putting down efficient consensus rules that can solve complex problems. The real challenge that DAO might face while its implementation would not be purely technical but social.